A moose is majestic and mighty—but also gawky and a little goofy. No wonder people get so excited when one crosses their path!

A bulky body. Long, skinny legs. A big, bulb-like nose. And a pair of broad, flat antlers. This moose has the kind of looks that can stop traffic. Just ask these tourists in Alaska!

The moose is the largest member of the deer family. A full-grown male moose stands over six feet tall at its shoulder. His antlers may be wider than you are tall. And he weighs more than a grand piano!

Here in North America, moose roam forests across Canada and Alaska and south into states from Maine to Washington. They are considered important symbols of the American wilderness. But the animal we call a moose also lives in Europe and Asia. In parts of Europe, it’s called an elk or elg. (The large deer WE call an elk is something else entirely!)

Sadly, there aren’t as many moose as there used to be, especially in the United States. Scientists aren’t sure exactly why, though they are pretty sure climate change has something to do with it. But people love moose and are working to protect them and the places where they live. To learn more about the marvelous moose, mosey on over to the next page.

MOOSE MEALS
The word “moose” comes from the Algonquin word for “twig-eater.” But twigs are only one of a moose’s favorite foods. Its flexible lips and strong bottom teeth are just right for stripping twigs, bark, and leaves from trees. A hungry moose may even break off the top of a small tree, then devour the parts that were too high to reach. In the summer, it also turns to softer, juicier meals: A hot, hungry moose will wade into a lake or pond to cool off while nibbling lily pads or pondweed

WHAT AN ATHLETE!
A moose may not look very graceful when it’s standing still. But just watch it move! When it’s trying to escape a predator such as a wolf, a moose can run as fast as 35 miles an hour. That’s probably faster than the speed limit in your neighborhood. (But just try to give a moose a speeding ticket!) It’s also a born high jumper and can easily leap fences as tall as seven feet.

If that’s not enough to convince you that the moose is an all-star athlete, consider this: It can swim as fast as Michael Phelps!

COLD WEATHER LOVERS
Moose may be right at home in the water, but they are really built for cold. Their long lets let them walk in snow as deep as three feet. And long, thick winter coats keep them cozy even in the bitterest cold.

Unfortunately, climate change is making winters shorter and warmer than they used to be. A thick winter coat makes a moose miserable on even a mild winter day. On a day when you’d go outside in a sweater, a furry moose would be panting from the heat! And even its lighter summer coat may be too warm for some summer days. Also, hot weather means more mosquitoes and other blood-sucking insects.  To those insects, a moose is like a big blood buffet. So rising temperatures are bad news for moose.

MOOSE ON THE LOOSE
Unlike other members of the deer family, moose don’t live in herds. They spend most of their time roaming the woods alone. But males, called bulls, and females, called cows, come together each fall to make baby moose (calves). And they know just the way to find each other: through moose-ic!

A bull moose lets out a snuffly grunt. A cow makes a long, sad-sounding moan. It’s their way of saying, “Hey, I’m ready to mate. Want to meet?” In spring, a moose mom gives birth to one or two fuzzy, light brown calves. Many animals, including wolves and bears, would love to make a meal of a helpless calf. But first, they have to get through Mom Moose! A well-placed kick from Mom will send a predator looking for an easier meal.

BUILT FOR THE FIGHT
Bull moose also kick. But, unlike female moose, they have another weapon: those massive antlers. Bulls lose their antlers each winter, then grow a new set over the summer. By the end of summer, they’re ready to put their antlers to use.

Bigger, older moose tend to have bigger, more dangerous antlers. And they use them to show other bulls who’s the boss. Before fighting, a bull does his best to scare off his foe. He thrashes his heavy headgear around. He paws the ground. He strikes a scary pose, looking as big and strong as possible.

Once the real fight begins, the battle is fierce. The bulls use their sharp antler points and powerful bodies to poke and push each other. Finally, one moose gives up and leaves. Come early fall, the winner—usually the moose with the more awesome antlers—has a good chance of mating with nearby cows. 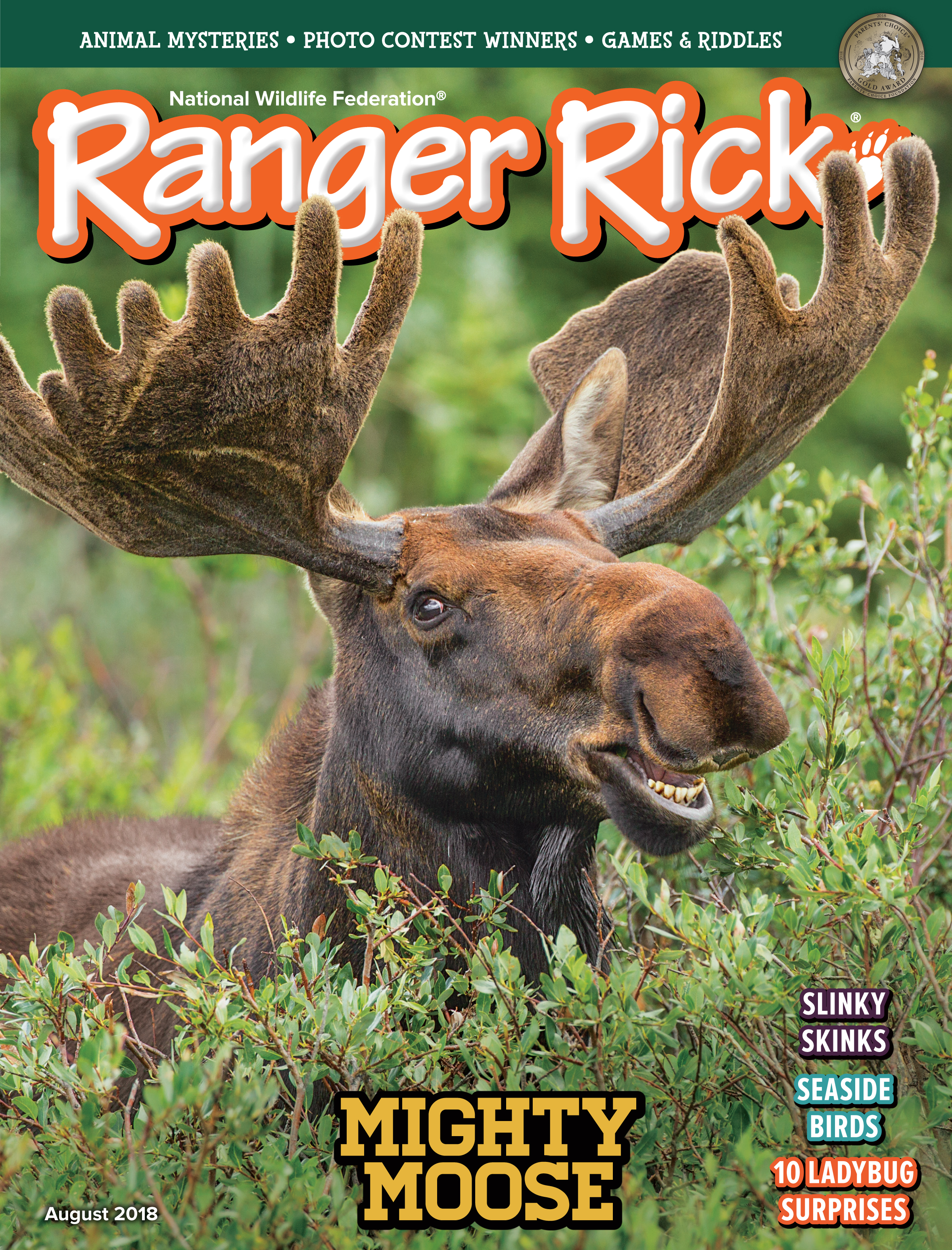